Before we leave for Seattle, we visit Stanley Park again. The ride to Seattle is not that long, so we have some time left. We looked at the famous totempoles in the park, nice! Later we wanted to hit the roud but … Argh! Traffic jam on the Lionsgate Bridge (but what a nice views we got).

On the way to Seattle we got some nice views of Mt. Olympus and Mt. Rainier. The Cascade Mountains looked great in the blue sky.

At the Canadian-American border we have to stop and show all our passports. Almost everything was ok. One of us had her green card somewhere in her bag under the tarp on top of the van. And we forgot to empty one of our boxes: we had to leave one lemon in Canada…

At night we all went to the Space Needle (Adults $8.-) and had a very nice view. But if you went to the Harbour tower in Vancouver this is a little bit disappointing: there is no explanation of what you can see, you only look through the glass and the gift shop is shouting at you. Later that day we went for the Pioneer Square Bar.

Pas for several bars, but they stopped playing when we arrived. Talked to a ‘native’ and asked when they would play again. Turns out that he is the guitar player. After 12 o’clock and when he still was sober, he would play again. We decided that we did not wanted to wait (to see him drunk), so we called it a day. 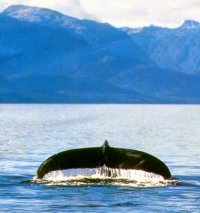